This article appears in BayAreaParent in August 2009. 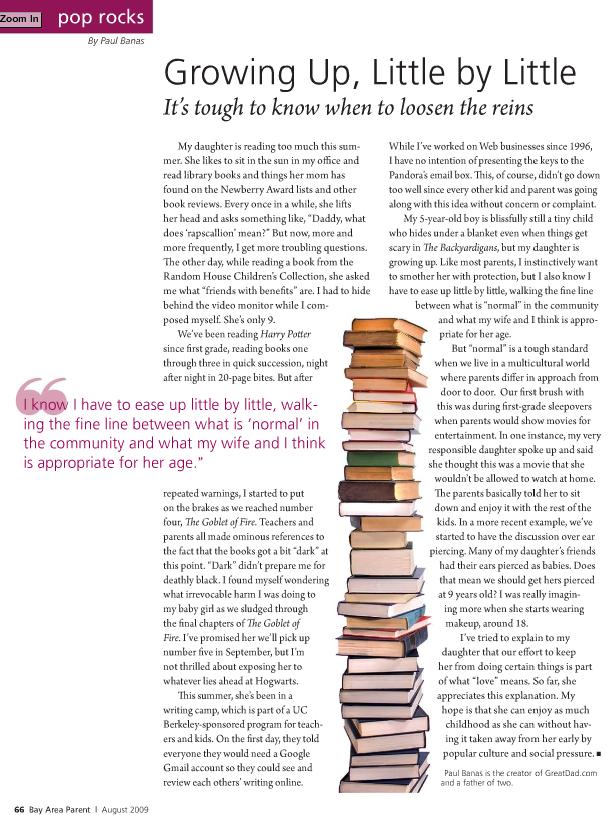 My daughter is reading too much this summer.  She likes to sit in the sun in my office and read library books and things her mom has found on the Newberry Award lists and other book reviews.  Every once in a while, she lifts her head and asks something like, “Daddy, what does ‘rapscallion’ mean?” But now, more and more frequently, I get more troubling questions. The other day, while reading a book from the Random House Children’s Collection, she asked me what “friends with benefits” are.  I had to hide behind the video monitor while I composed myself. She’s only nine.

We’ve been reading Harry Potter since First Grade, reading numbers 1-3 in quick succession, night after night in 20 page bites.  But after repeated warnings, I started to put on the brakes as we reached #4, The Goblet of Fire.  Teachers and parents all made ominous references to the fact that the books got a bit “dark” at this point.  “Dark”  didn’t prepare me for deathly black.  I found myself wondering what irrevocable harm I was doing to my baby girl as we sludged through the final chapters of The Goblet of Fire.  I’ve promised her we’ll pick up#5 in September, but I’m not thrilled about exposing her to whatever lies ahead at Hogwarts.

This summer, she’s been in a writing camp, which is part of a Berkeley sponsored program for teachers and kids.  On the first day, they told everyone they would need a Google Gmail account so they could see and review each others’ writing on-line.  While I’ve worked on web businesses since 1996, I have no intention of presenting the keys to Pandora’s email box.  This of course, didn’t go down too well since every other kid and parent was going along with this idea without concern or complaint.

My five-year-old boy is blissfully still a tiny child who hides under a blanket even when things get scary in The Backyardigans, but my daughter is growing up.  Like most parents, I instinctively want to smother her with protection, but also know I have to ease up little by little, walking the fine line between what is “normal” in the community and what my wife and I think is appropriate for her age.

But “normal” is a tough standard when we live in a multi-cultural world where parents differ in approach from door to door.   Our first brush with this was during first grade sleepovers when parents would show movies for entertainment. In one instance, my very responsible daughter spoke up and said she thought this was a movie that she wouldn’t be allowed to watch at home.  The parents basically told her to sit down and enjoy it with the rest of the kids. In a more recent example, we’ve started to have the discussion over ear piercing. Many of my daughter’s friends had their ears pierced as babies. Does that mean we should get her pierced at nine years old? I was really imagining more when she starts wearing make-up, around eighteen.

I’ve tried to explain to my daughter that our effort to keep her from doing certain things is part of what “love” means. So far, she appreciates this explanation. My hope is that she can enjoy as much childhood as she can without having it taken away from her early by popular culture and social pressure.