This article appears in BayAreaParent in June 2009. 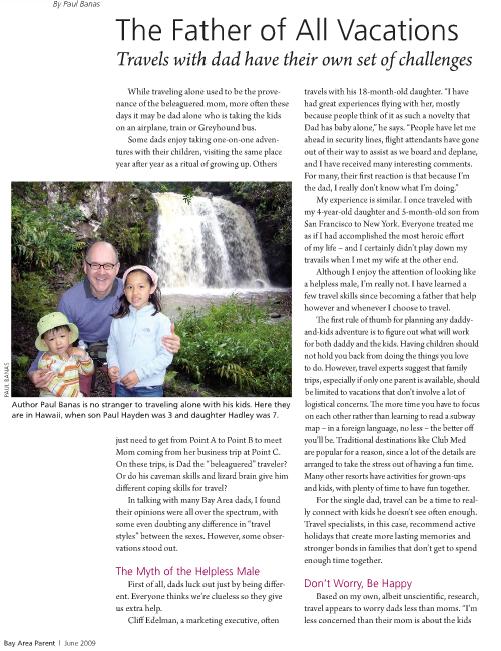 Despite all the press on “stay-cations,” a recent Jiffy Lube survey
says that 88% of Americans will still take a vacation this summer.
While traveling alone used to be the provenance of the beleaguered mom,
more and more often, it may be dad who is alone taking the airplane,
train, or Greyhound bus.   Some dads enjoy taking one-on-one adventures
with their kids, some visiting the same place year after year as a
ritual of growing up. Others just need to get from Point A to Point B
to meet Mom coming from her business trip at Point C. On these trips is
Dad the  “beleaguered” traveler?  or do his caveman skills and lizard brain give him different coping skills for travel?

I talked to over twenty dads and their opinions were all over the
spectrum, with some even doubting any difference styles between the
sexes. However, some observations stood out.

First of all, dads luck out just by being different. Everyone
thinks we’re clueless so they give us extra help on plane, sit with our
kids, mix formula…all kinds of stuff that they would never do for those
expert-looking moms. As Cliff Edelman, a marketing exec who often
travels with his 18 month-old daughter, recounts,  “I have had great
experiences flying with her, mostly because people think of it as such
a novelty that Dad has baby alone…People have let me ahead in
security lines and for coffee, flight attendants have gone out of their
way to assist as we board and deplane, and I have received so many
interesting comments. For many, their first reaction is that because
I’m the dad, I really don’t know what I’m doing.”

My experience is similar. I once traveled with a five month old and
four year old from San Francisco to New York. Everyone treated me as if
I had accomplished the most heroic effort of my life and I certainly
didn’t play down my travails when I met my wife at the other end.

Whatever the travel style, the first rule of thumb for planning any
family adventure is to figure out what will work for both dad and the
kids. Having kids should not hold you back from doing the things you
love to do. However, travel experts suggest that family trips,
especially if only one parent is available should be limited to
vacations that don’t involve a lot of logistical concerns.  The more
time you have to focus on each other rather than learning to read a
subway map and in a foreign language, the better off you’ll be.
Traditional destinations are popular for a reason since a lot of the
details are arranged to take the stress out of having a fun time.

For the single dad, travel can be a time to really connect with
kids he doesn’t see often enough. Travel specialists, in this case,
recommend active holidays that create more lasting memories and
stronger bonds in families that don’t get to spend enough time
together.

Based on my unscientific research, travel appears to phase dads
less than with moms. “I’m less concerned than she is about them getting
cold/hot/wet/hungry. I mean: I am of course concerned, but less
concerned,” says San Francisco-based Rabbi Alexander Seinfield. And I
agree. I often let the kids go out the door without a jacket or let
them skip lunch if they aren’t hungry. Especially when we’re traveling,
it’s just not worth the fight given the other stress points of travel.
As another dad said, “I’m more willing to go to a restaurant that will
make our little boy happy, even though it might not be a restaurant
we’ll tell our friends about when we get home.”

Dads often plan more active adventures, and stuff that just plain
looks fun. While my wife and I love museums and galleries, I know my
kids, and I always scan listings for things that we will enjoy
together. I know that they are going to enjoy a museum about magic or
space aliens more than an art gallery and plan accordingly. This is why
God created “Ripley’s Believe It or Not” museums and put them on every
Fisherman’s Wharf-like tourist area in America. In almost all cases,
it’s dad who is willing to go on the scariest rides at the amusement
park. As Tim Leffel, author of The World’s Cheapest Destinations, explains, “Dads are better at becoming kids again themselves while on vacation.”

I often advise friends traveling with kids to make time for doing
stuff “we didn’t come all this way to do,” and by that I mean hanging
out at a playground, even though you could be seeing yet another
attraction. Kids have their own personalities and needs and wants and
you ignore these at your own peril. On one memorable trip we took
through northern Italy by car, our three year-old announced on Day Two
that she didn’t want to get in the car again. Surrounded by Tuscan
villas and sun-dappled eateries, we spent the next few days sitting at
the pool.

What areas are challenges for dads?  Many dads mentioned that they
either have problems with their patience, or do all they can to “stay
patient.” San Francisco dad, Rick Matcovich, advises to “not get too
attached to a timetable and be willing to stop more than you
want…whatever keeps the peace.” Dads do seem to lose their patience
about different things than moms, quite often related to their own
notions of time and productivity.

Dads often fall prey to the temptations of the Blackberry.  Steven
Addis, a Piedmont dad, advises to turn it off.  “Kids know when you’re
distracted, so get the business calls and emails done after bedtime.”

The other most often mentioned concern is how to handle bathroom
visits with little girls. Little girls up to age two barely have any
awareness of where they are going. By age three, they start to make
“observations” and asking questions about what they see. Dads then
develop coping strategies. Some men scout out empty restrooms so their
daughters won’t see men standing at urinals. Others push their kids in
quickly to get into a stall as fast as possible.

By age four or five, most dads feel uncomfortable taking their
daughter into a men’s room in a crowded area. This can be a two-part
problem. Dad feels worried about leaving his daughter in busy rest
room, and often the young girl feels insecure going in without help. In
this case, some experts recommend sending the girl into the women’s
room alone, equipped with a “potty whistle” in case she needs
attention. Some dads ask a woman going in at the same time to keep an
eye on her.  Dads have to use their own judgment on how far to push
kids weighing the risks of letting them out of their site for a few
minutes. Luckily family restrooms are becoming more common in traffic
places like airports and stadiums. The larger problem then becomes how
dad can find a restroom while leaving his kids outside.

Many dads I talked to said that traveling with dads requires more
planning .  While dads might like to think they are more easy-going at
facing what happens during the day, they find that it’s important to
know “what comes next.” The plan is meant to change but kids always
want to know what is happening and you can’t entirely go with the flow
with them. Additionally, with small kids of any age, and not just
babies, you need to carry a full arsenal of supplies wherever you go .
Ron Sebahar, a San Francisco dad, says he has a ready-prepared backpack
filled with water, sunscreen, books, band-aids, granola bars, and other
supplies whenever he is out with his daughter. “Inevitably, you find
yourself waiting with free time or in need of some medicinal items. So,
it never leaves my presence.”

Dads have risen to the challenge of traveling with kids, handling
tough situations with grit, determination, and a full diaper bag.  We
have tasted the future and there’s no going back. Some families even
split up the vacations, with each parenting taking a child and each
parent/child couple doing what they most want to do together. Some dads
find that vacation more relaxing. As one dad put it, “traveling with my
kids without my wife is easier because I don’t have to fight with her
every half an hour about how to do something new.” However, for most, a
trip alone with the kids, while a manageable experience, isn’t as fun
as having the whole family together to share the good times and the
memories.