Just in time for camping season, comes the new Rogue 2 flashlight from Icon. I had not seen these ultra-cool flashlights, but imagine carrying what looks to be a light saber in your hand that emits a very strong 100 lumen beam out of just a few LEDs. I supposed it depends on your battery choice, but packaging says 72 hours of run life on one set of batteries (at low light) for this flashlight which may be due to the efficient LEDs. Icon says that LED’s are super-efficient so runtimes are multiplied typically ten times compared to the old bulb lights on the same batteries. And, since they are solid state electronics and not a glass bulb with a fragile filament, the bulbs can’t burn out orbreak. The life expectancy of an LED is in the thousands of hours.

My kids just love the styling. It’s also waterproof down to one meter (3 feet) so perfect for my genetically challenged butter-fingered children. 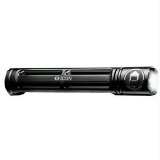 The flashlight also allows for 10 lumen output as well by double clicking the on/off button, which thrills my 7 year old to no end. I just have to make sure he’s not pointing it at anyone when he kicks it up a notch, since 100 lumens (what is a lumen anyway?) is pretty darn blinding, or at last shocking.

This is sure to be a big challenger to the Mag Light, which has held the title of “most solid” and best styled premium flashlight for 20 years. Only drawbacks, the airy frame design wastes and then doesn’t provide any natural place to tie the included lanyard to the flashlight. On the other hand, you could argue that you can tie 30 or 40 things onto the frame. 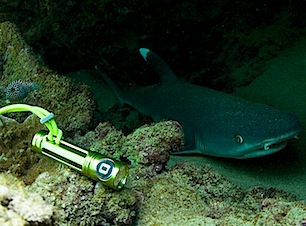 About $49 at Amazon. Not cheap, but you can add it to the earthquake/tornado/hurricane/flood/other end-of-the-world disaster kit and be pretty sure it will keep working. Or a good gift for Father’s Day (which is coming up after we get the moms out of the way).