My kids think I’m a bad dad in our house on at least one score. I don’t let the kids play video games during the school week, and so far, we have not let them have a DS or other personal gaming device. We do let them play on the iPad, again on weekends. However, when it comes to video games, we mostly limit use to multi-player games on the Wii, which luckily are easy to find.

Many dads forget that there are still many electronic toys that captivate kids’ imaginations but don’t have anything to do with video. Here’s a list of a few that we like in our house, and still have the flashing lights, sounds, and movement to intrigue a ten year old.

1. Pinball – yes, pinball! It’s back among a lot of people as a classic game that works well for crowds and competition. There’s now a restoration market for pinball games, that were designed only to last a few years in a smoky barroom, but which can last a lifetime in a rec room. Maintenance is relatively cheap since the devices themselves are simple collections of wires, switches and cheap bulbs. For $500 you can pick up an old game that is fun to play and makes a great piece of modern art. We bought an completely refurbished game of High Hand and the kids, and their friends, love it! They are not maintenance free, but if you’re so inclined, can provide a decade of lessons in basic circuitry and a project for kids and dads to work on together. Most large cities have expert repairpeople if you need them.

2. Slot car sets – If you haven’t taken a look at these since you were 12, it’s time to take a look again. Now they are made with digital switches. That means you can have many cars on a 2-lane track. On our set from Carrera, you can have up to six cars, each with its own controller. With digital, the cars move from lane to lane at different switching points allowing for passing and intense action between cars speeding along limited real estate. The sets aren’t cheap, but about the same in 1980 dollars. Expect to pay around $300 for a good set that includes 2 cars.

You and your kids will be amazed how fun it is to watch the cars go around and around the track. Be prepared to squabble over who gets the “best” car, however, as well as a lot of jumping up and down as you chase cars that hit the turns a tad too fast. More cars and more controllers are on my own gift list for Christmas this year so I can finally compete with my 7 year old. He got permanent dibs on the Dodge Charger police car in our set while I have the surprisingly doggy Ford Mustang.

3. Remote control helicopters – These have been on the scene for about five years now, with the first ones completely unflyable. The early ones also had rotors that broke off during the first flight, ruining any father/child flying interlude and then costing at least a ten spot to repair. New helicopters, though, like the Military Thunder by Swann, use multiple flexible rotors that make flying a lot easier out of the box. With the older helicopters, I would wince every time my son took the controls, silently thinking, “well, there goes $30.” But this helicopter is really so easy a 7 year old can fly it (recommended age on box: 8 years). The secret is in the “twin counter-rotating coaxial rotors.” The instructions point out that you’d never build a real helicopter this way, but it does make a scale model that much more stable with less adjustments to “trim,” all while increasing lift. Kids love these helicopters! Good news, bad news is that you only get 5-10 minutes flight time with each 25 minute charge. Sometimes, though, dads like to limit break time from work or chores and this is a natural way to do it.

4. Remote control boats– If you have a pond, or even an urban fountain that tolerates boats, these are also fantastic father/child toys. However, you have to research them more carefully since you don’t want to go all the way to the park for a 5-minute boat ride and then go home to recharge. 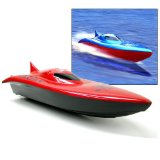 5. Stunt Lazer Chaser (Thinkway Toys) – New on the market this year is the Stunt Lazer Chaser (the first (that I know of) remote control car that is steered either by right/left/forward buttons or by a pointing a laser beam at where you want it to go. This is a completely new concept this year. The cars are also 2-sided so, with included flip ramp, they can go flying and still keep moving once they hit the ground. Vehicles are 1:32 scale, so a nice hefty size and move very fast. The range for the remote is 40 feet. Unfortunately, they are a bit pricey at about $65 (Amazon), but they are a lot of fun for dads and kids.

Have you found other fun electronic games that keep kids away from video and keep the family playing together. Let us know in comments!

GreatDad Review Policy: The featured product for this review was provided to us, at no cost, by the manufacturer or representing PR agency for the sole purpose of product testing. We do not accept monetary compensation for reviewing or writing about products. We only review products that we have personally tested and used in our own homes, and all opinions expressed are our own.