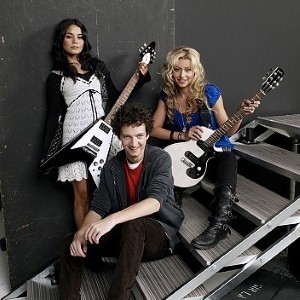 Child-friendly? Older children and teenagers will most likely be drawn to the film Bandslam, given its plot revolving around being a rockstar and how a love of music can take you places. It also has tween favorites Vanessa Hudgens from High School Musical and Alyson Michalka from Phil of the Future. Though it’s rated PG, parents should be aware of some mature themes in the film such as a chronically ill parent and bullying. Given that, this movie is probably appropriate for those aged 10 and up.

For most teenagers, music is an important aspect in their life and according to the new film Bandslam, it can also lead to a better high school life.

Will Burton, played by newcomer Gaelan Connel, is bullied in school and essentially deemed a "loser" by his classmates. However, when his vast musical knowledge is uncovered by one of the popular girls, Charlotte Banks (Aly Michalka), he’s suddenly invited out to shows and becomes socially acceptable among his peers.

Eventually, Charlotte asks Will to manage her rock/ska band and is upfront about her goal to get revenge on an ex-boyfriend at the upcoming battle of the bands. As Will slowly comes out of his shell, a love interest in Sa5m (the 5 is silent, don’t ask) played by Vanessa Hudgens.

Children and teenagers who are really into music will probably be drawn to this film, given the idea that musical talent may be lurking in anyone. However, fathers should be warned there are mature themes within the film such as an absentee father, the aforementioned bullying and a chronically ill parent. The latter may upset some younger children.

Also, there is a healthy dose of music in the film, so expect the kids to be asking for the soundtrack afterwards.