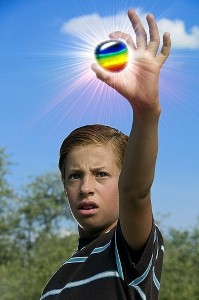 Child-friendly? Shorts is a new film from director Robert Rodriguez who gave families the Spy Kids trilogy. With this movie, Rodriguez again has a group of kids as his protagonists, only this time the story is about finding a magical multi-colored stone that grants wishes to whoever holds it. Some younger children may get disoriented or confused with the film’s fast edits. Parents can expect some scenes of bullying and mild insults . With a PG rating, this film is probably appropriate for children ages 10 and up.

If given the power, what would you wish for?

That’s the question that hangs in the air in Robert Rodriguez’s new film Shorts, a family adventure film about a kid who finds a rainbow-colored rock that grants wishes to whoever is holding it at the time.
The story centers on Toe Thompson (Jimmy Bennett), who also narrates the film. He’s a kid who is bullied at school by a group led by Helvetica Black (Jolie Vanier).

Thompson, along with the rest of the characters in the film, live in Black Falls, a community that essentially exists for the workers of a company called Black Box Industries. The corporation is run by Mr. Black (James Spader), who has a habit of threatening his workers as a form of motivation.

However, once Thompson discovers the mysterious wishing rock, all sorts of trouble ensues. Most of the characters get their hands on the rock at some point, allowing them to wish for whatever they want. Much of the comedy comes from how the wishes are interpreted by the rock.

Parents should know the film has some quick editing and at times goes back and forward through time. This may be confusing for some younger children. Also, the bullying scenes, while funny, may also make some children feel uncomfortable. But they are mainly there for comic relief.