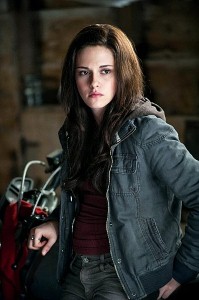 Child friendly? The Twilight Saga: Eclipse is the third chapter in the Twilight series. It tells the story of Bella Swan, her vampire boyfriend Edward Cullen, and details their romance and adventures. It also follows Jacob Black, who is also in love with Bella. The film contains scenes that involve kissing and talk of sex. Recommended for children ages 13 and up.

When it comes to the Twilight series, does it really matter what critics or parents say about it? The film can garner all the thumbs-down in the world and your teenage daughter will still be camping out at the local movie theater and counting down the moments until she’s face to face with a 40-foot image of Robert Pattinson.

So it probably makes no difference that The Twilight Saga: Eclipse isn’t really much of a great film at all. That’s because it features Bella Swan (Kristen Stewart) and Edward Cullen (Pattinson) smooching like it’s going out of style, and includes several scenes in which werewolf-human Jacob Black (Taylor Lautner) sports his shirtless upper bod. It’s like asking a crazed football fan to refrain from watching Super Bowl Sunday.

The third film in the saga picks up where the second, New Moon, left off. Bella and her vampire beau are in the throes of a relationship and find themselves snuggling every chance they get. Bella wants to take things further, but Edward, who was born during an era of true chivalry, insists they should get hitched before they do.

Who says mythical creatures can’t be gentleman? Of course, Edward is a shining example of one throughout the entirety of the sluggish film. When he and his family discover that Bella’s life is in danger, he pledges to save her. When she winds up kissing Jacob to prevent him from killing himself, he steps aside. If it weren’t for the fangs and glittery skin, he would be a parents’ dream-come-true.

Overall, the film may be a decent one for dads to see with their daughters. Still, be forewarned – your little girl may be a bit hesitant to wear her Team Edward or Team Jacob t-shirt loud and proud with her pops by her side. Save yourself two hours of teen angst and let her see this one with her pals.