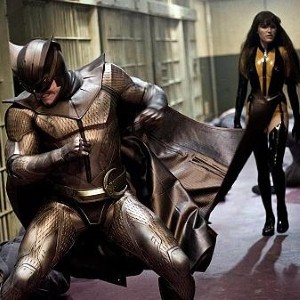 Child-friendly? In a word: no. Fathers are advised to proceed with extreme caution before allowing their children to see this R-rated movie. It is not a typical comic book superhero tale and contains graphic violence, sex, swearing and nudity that is not appropriate for younger kids. However, some older teenagers – particularly those who are fans of the original graphic novel – may be able to handle these issues, as well as the dark atmosphere and moral uncertainty.

Watchman is based on a much-admired cult graphic novel by Alan Moore, and the new movie stays fairly close to its source material in plot and tone.

The dark tale is set in an America in which Richard Nixon is still president, U.S.-Soviet Cold War relations are intensifying and a Doomsday clock is counting down the time until a nuclear war.

The film launches with a murder, whose victim is revealed to be the Comedian, part of a crime-fighting group that had gone into hiding.

In an effort to find who killed their buddy, Roschach, Nite Owl, Silk Spectre and Ozymandias swing into action.

They are much less morally certain than your typical crime-fighters, however, with some that could be almost described as antiheroes. Even Dr Manhattan, the only one of the group who has superpowers, seems on the edge of depression.

Clearly, this is a complex film that may confuse or bore younger children, as well as containing violent and sexual content most parents would find objectionable. Fathers who are interested in exploring a paranoid nihilistic alternative reality, however, may enjoy the ride.