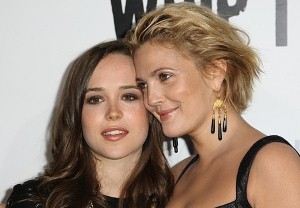 Child-friendly?Ellen Page, who is best known for her role in the indie film Juno, returns to the screen in Whip It, a coming-of-age story that features all-girl roller derby leagues as the vehicle for her character to find herself. The film, which is the directorial debut for Drew Barrymore, contains some action-packed scenes on the racetrack, as well as some strong language and sexuality. Young girls and older teenagers may be attracted to the film about the alternative sport, and is recommended for kids aged 15 and up.

Girls of all ages may be drawn to the new film Whip It, which means parents may be asked to buy rollarskates and answer questions about roller derby leagues in the near future.

Ellen Page stars as a 17-year-old named Bliss living in a small Texas town who is forced to compete in regional beauty pageants by her parents. After she sees a flier about a roller derby competition in nearby Austin, she decides to check out the unique sporting competition and sneaks in after lying about her age.

While the atmosphere at the game is raucous and features many of the players openly drinking, Bliss is attracted to the camaraderie of the team of skaters and is soon taking a shot at a spot on the team at an open tryout.

There is some sexuality in the film, particularly with Bliss and a love interest played by Landon Pigg. Other scenes feature vulgar language as well as some unsavory names for some of the derby players.

However, there is a message of individuality and the fun a young person can have after joining a sports team, even if the point of the game is to skate around a track and push people around.