This list was sent to me by the makers of
FakeTV, which is a cool gadget we actually own. FakeTV shines random color patterns on your wall to emulate the changing blue glow of a TV so that potential burglars think you are at home. It self-activates when the sun goes down and uses less electricity than a regular lightbulb. I know it works because our neighbors called us while we were on vacation to tell us, “Someone’s in your house watching TV!” Best home security tip under $40. 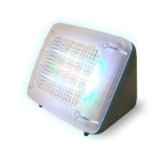 To get some PR, they sent me these “worst gifts.

10. Coupon Books for back-rubs or “whatever.” He says
this is selfless service, she says “so, you could not
think of anything to get me.” (For him, the right
“whatever” might bump this off the list.)

9. Fake engagement ring. Cubic Zirconium might be a
good way to hedge your bets, but gives her reason to
doubt your love would really cut glass.

7. Panini Maker — from the guy that loves paninis.

6. From Her: A pair of tickets to the Bridal Show.

5. From him: A pair of tickets to the Monster Truck
Fest.

4. Abdomen Exerciser — sort of the opposite of
chocolates, and telegraphs a message. Reduces the
possibility of “whatever” happening on Valentine’s Day
(see number 10).

3. Roses — with a card made out to a different woman.
It turns out the other gal also got the wrong card as
well.

2. Nothing. (Even the roses to the wrong woman was
better.)

1. The top worst Fake Valentine’s Day gift was a
heart-shaped box filled with dog biscuits. The lovely
and attractive woman that submitted this story won the
free FakeTV that was the contest prize. She has long
since gotten over the rapscallion that perpetrated this
travesty — good riddance! That jerk has since become
as friendless as you would expect him to be.