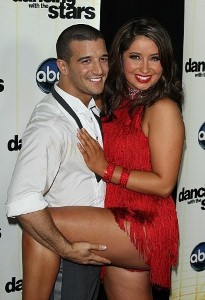 Her mother may have a penchant for grabbing headlines, but Bristol Palin appears well on her way to having the same talent. The 20-year-old daughter of Sarah Palin, the former governor of Alaska, may be looking to further distance herself from her 1-year-old son's father, Levi Johnston. She's reportedly removing her baby-daddy's surname and replacing it with her own, E! Online reports.

The Dancing With the Stars contestant happily posted on her Facebook wall that her son's name is now Tripp Easton Mitchell Palin. Previously Tripp was officially a Johnston. Sources close to Palin say that Johnston agreed to the name change under the condition that it excused him from paying child support.

"Bristol wants to fully eliminate Levi from her life and Levi is making it easier than ever for her," the source told a South Dakota radio station.

Still, there are several conflicting reports. The original Facebook post has been taken down, and another person close to the family told the news source that no such name change arrangement has been made. Court officials have confirmed that, at least for now, Tripp is still officially a Johnston. However, given the family's penchant for causing a stir, we're sure there will be more details to report on as the saga unfolds.