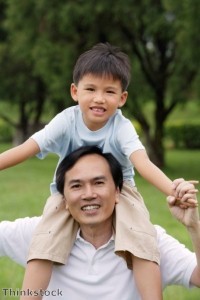 New research makes the case for fathers to sing and play hand-clapping games with their children.

A first-of-its-kind study suggests that kids who participate in hand-clapping songs have better cognitive and motor skills as well as better social integration than kids who don’t take part in similar activities.

In addition, researchers say kids who don’t participate in clapping games are at a higher risk for developmental learning problems.

"We found that children in the first, second and third grades who sing these songs demonstrate skills absent in children who don’t take part in similar activities," explained lead researcher Dr. Idit Sulkin. "We also found that children who spontaneously perform hand-clapping songs in the yard during recess have neater handwriting, write better and make fewer spelling errors."

Sulkin went to several elementary school classrooms and engaged the children in either a board of education sanctioned music appreciation program or hand-clapping songs training – each lasting for a period of 10 weeks.

Within a very short period of time, the children who until then hadn’t taken part in such activities caught up in their cognitive abilities to those who did," she said.

Parents can encourage their children to take part in these games by teaching them their own favorite clapping songs from their childhoods or making up new ones together. Educators, music teachers and librarians may also offer advice for parents.