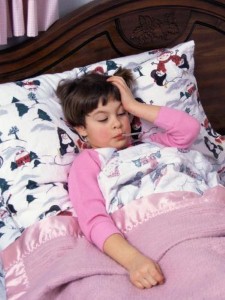 Most parents assume that if their child has a fever, there has to be some effective treatment to bring it down. Though conventional wisdom has suggested such a route for years, a new report published by the American Academy of Pediatrics suggests otherwise. The authors say that there is no need to treat a fever in a normally healthy child, and that doing so may prolong the illness.

The advice was based off a study led in part by Dr. Janice Sullivan, who found there was no need to treat a fever unless a child is under three months old or has a heart condition, MSNBC reports. The only reason to treat a fever is to reduce pain and discomfort. However, doing so may extend the length of the sickness because fevers are the body's defense mechanism.

"Studies done in children with chicken pox, for example, found that children whose fevers weren't treated had about a day less that they were considered contagious compared to those who were treated," Sullivan told the news source.

Although a fever is a common part of some sicknesses, eMedecineHealth reports that dads should contact medical professionals if there are additional symptoms such as vomiting, diarrhea or significant dehydration.