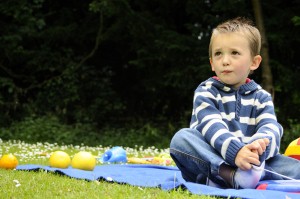 Whoever said honesty is the best policy clearly did not have any children. Every father encounters a time when he may lie to his children. Whether it is to protect them from some unsavory detail of your past, or to keep them living in ignorance just that much longer, a little fib can be a necessary part of parenting.

With that in mind, we've compiled the top five lies every dad should tell his kids.

1. Rewrite history. Did you drink in high school? Of course not. Did you ever get arrested for streaking through the school parking lot? Preposterous. Were you the best athlete in town? Absolutely.

2. Cover your tracks. So you and your wife have just been walked in on by your kid. Do you sit them down to begin a frank discussion of sex? Hell no, you two were just wrestling, obviously.

3. All hamsters go to heaven. Would it really be the best idea to tell your son or daughter that his or her beloved pet was killed because you accidentally fed it rat poison. You should probably just go with telling them it got cancer.

4. Santa exists. It's the fat old man of lies, and it keeps them in line all year round. But you should probably break the news by the time they go to college.

5. You were were brought by the stork. This one's a standard, but it has helped many a dad weasel out of an awkward conversation.