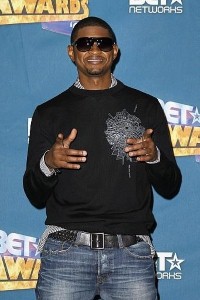 It appears that R&B star Usher really isn’t that different from many other dads. The singer recently told People magazine that his father’s day wish is he wants sons Usher “Cinco,” 2, and Naviyd, 18 months, to give him a good old-fashioned Father’s Day.

“They’re not quite at the age where I want them to cook breakfast for me,” he told the magazine while attending the FIFI Awards in New York City. “But they definitely should try to make me the best cereal they can.”

The music icon also says lavish gifts aren’t on his list of requests for the day.

“It is about being home with my sons. They paint me some incredible pictures and give me the hugs of life.”

The 31-year old singer recently ended his two-year marriage to Tameka Foster. Still, he hopes to find love in the future.

“Love is a journey and an adventure. And love that I have had in the past has shown me that hopefully when I do find the right woman, I’ll be great for her and she’ll be incredible for me.”

In March, Usher released his newest album, Raymond vs. Raymond. He also debuted a new fragrance this year, which recently helped him become the Fragrance Foundation’s 2010 Fragrance Celebrity of the Year.