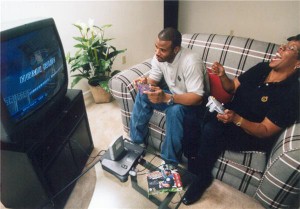 Fathers who find their parenting skills challenged when their child asks permission to buy the latest gun-happy video game may be interested in the results of two new studies about violent media.

Findings published in the journal Pediatrics suggest that viewing violent media -particularly websites and video games – may be related to aggressive behavior in kids.

In the first study, Dr Michele L. Ybarra of Internet Solutions for Kids and colleagues interviewed more than 1,500 subjects ranging in age from 10 to 15, with both genders about equally represented.

They asked questions about their online browsing habits, as well as whether they had engaged in some type of seriously violent behavior, such as shooting, stabbing, robbery, assault or sexual assault in the past year.

The researchers found a positive association between viewing violent websites and taking part in aggressive actions.

In the second study, a team at Iowa State University found that kids who played violent video games were more likely to get into fights with their peers than those who did not.

Dr L. Rowell Huesmann of the University of Michigan told CNN that desensitization may play a role, saying that "when you’re exposed to violence day in and day out, it loses its emotional impact on you."