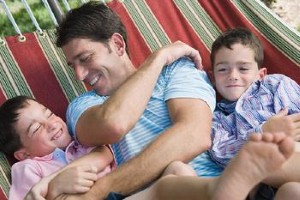 Fathers may need to employ their parenting skills to get their kids outdoors more often so they can be exposed to more sunlight.

A new study has suggested that approximately 7.6 million children in the U.S. may have low levels of vitamin D. The most abundant source for this nutrient is exposure to natural sunlight.

Researchers at the Albert Einstein College of Medicine of Yeshiva University conducted the study that examined more than 6,000 children to see what their vitamin D levels might be.

Low levels of vitamin D have been linked to an increased risk of diabetes, heart disease and decreased bone health.

"We expected the prevalence of vitamin D deficiency would be high, but the magnitude of the problem nationwide was shocking," lead author Dr Juhi Kumar, a fellow in pediatrics at Children’s Hospital at Montefiore Medical Center at Einstein College, said.

In the past there have been several small studies that targeted small pockets of children in the general population, but this is the first to cover the issue of vitamin D deficiency on a nationwide basis.

Some health officials have said that part of the reason some children may not be getting enough vitamin D is because they are spending too much time indoors, presumably watching television, using the internet or playing video games.

Fathers who may be concerned with the overall health of their son or daughter should use their parenting skills to convince their children to spend time outdoors.

This doesn’t mean barking an order. Instead, consider using this as an opportunity to plan a family event, such as hiking a nearby trail or going to the beach.