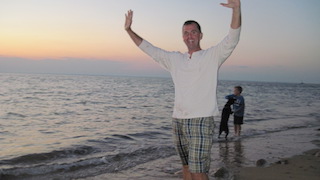 Mondays are busy for my son Max. First, school, and tackling all the challenges of first grade. Then home for a snack while he conquers his homework, then off to Religious Instruction, and finally to his baseball game. I’m a fan of baseball, a big fan of Max, and a fan of having a reason to leave work early. So Max’s Monday night games agree with me.

Max’s team is light on veteran players – just four second graders play for the Crimson Tide. But in baseball years, the difference between a 7 and an 8 year old is so much more than the 365-days imply. Coordination, strength, focus – all of these seem to come easier to an 8-year old, so it’s understandable why Max is so impressed by them.

The bleachers are peppered with parents on this cool Monday night, and the scene reminds me of an awkward high school dance with moms clustered together, segregated from the dads. The dads tend to stand closer the field, more engaged with the game. We cheer on our sons, and compliment each other when a good play is made or a ball is hit solidly. Encouragement is yelled across the field – advice, too. Like our sons, we are trying to do our best, I suppose.

The game moves along quickly, as these games go. Max plays well, though as I watch him race past me toward home, I wish that he were running faster. Of the many things that Max inherited from me were big, flat feet. Ugh. Matt, a second-grader, and one of the better players in the league, hits a deep fly ball over the right fielder’s head. Max turns and asks from the dugout, “Dad, did you see that?” I confidently tell Max that when he’s eight, I bet he’ll do the same thing. He smiles at the thought. Sometimes I get this parenting thing right.

In the end, the Crimson Tide are victorious, though at this age, there’s not much of a premium put on the score. A well-played game in which the kids have fun is really all that matters. Yet the dads find themselves congratulating each other. Go figure. Maybe it would be more sportsmanlike if we followed our son’s leads, and gave the opposing team’s dads high fives and told them, “good game”.

This being a school night, the crowd dissipates rather quickly after the game. I walk over to the coach to thank him, and to give him a hand packing up the sports equipment. Max asks if he could toss the ball around with Matt and Bryce, the two best eight-year-olds on our team. “Just until I help Matt’s dad clean up, okay?” Bryce’s dad pitches in, and we make small talk as we gather up the helmets, balls and bats. Our work is done rather quickly – too quickly for any of us to have the heart to call in the boys.

I walk over to the dugout, take a sip from Max’s water bottle, and face the outfield. And there I stand, admiring my not-so-little boy running through the damp outfield grass, laughing and throwing high pops to his teammates, the dirt-stained ball floating through the twilight and landing with a smack in their leather mitts.

It was already approaching Max’s bedtime, and we hadn’t eaten dinner yet. “Max, time to go buddy”, I yell above the banter. He replies as he always does when he doesn’t want to leave a place he’s enjoying: “Five more minutes, dad”. I acquiesce. I always do.

And I savor those five minutes, remembering how we got to this time. How I tossed wiffle balls underhanded from a few feet away, and chased him around the flat, rubber bases of our makeshift baseball diamond in our backyard. How I taught him to break in his mitt, use two hands when he caught, and to “power-up” when he threw. Those days are mostly gone now. Max has new playmates, these second-graders, and the smile on his face and his playful jaunt as he walks toward me tells me that’s a good thing. “Ready Dad?”, he asks as nears me.  “I’m ready, Max”, I lie.  Truth is, I’m, not ready for this at all.