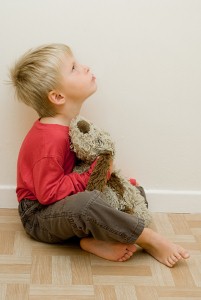 While most parents might balk at letting young children pepper their speech with swear words, such is not the case for Aaron Trainster. The stay-at-home dad recently took to the page at Babble.com, to reveal why he feels that giving his son more linguistic latitude may not necessarily be a bad thing.

His profanity-accepting parenting stems from his desire to move away from the niceties that govern some parents' styles. Where some parents will curtail their language around their children, Trainster writes that he has not attempted to change the way he speaks, which has given his son a broader vocabulary – even if it means he drops a four letter word after he hurts himself.

"I will take a responsible, stubbed-toe curse word to a 'poopie-butt' or 'doodie' or 'pee-pee' or whatever other cutesy scatological nonsense that makes other 4-year-old boys crack up," he writes for the publication.

Still, while Trainster's approach certainly has its merits, it's not without its critics – including his wife, with whom he has butted heads over the issue.

Whether encouraging breadth of speech or simply just trying to have a fluent sparker, the National Institute on Deafness and other Communication Disorders reports that the first six months of an individual's life is the most important to a child's language development.