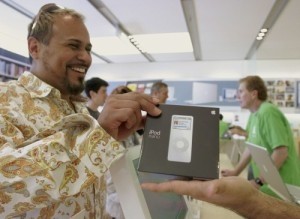 For some fathers and their children, it’s all about the music.

A new study from the Pew Research Center has found that a shared appreciate of the Beatles’ catalogue has helped bridge the generation gap in America. This suggests fathers may be able to combine one of their favorite musical groups with their parenting skills.

The researchers for the study state that "there’s now broad agreement across the generations about one realm of American culture that had been an intense battlefield in the 1960s: the music," the New York Times reports.

The study focused on those aged 16 through 64 and found that the group as a whole listened to rock music more than another other format. When asked to rank their favorite bands, the Beatles were in the top four among every group surveyed.

And come this fall, there may be another way for the different generations to share their love for the Beatles, provided they have a Playstation 3, Xbox 360 or a Nintendo Wii.

The new Rock Band game featuring the Beatles music will be released on September 9 and is a rare occasion when the group has licensed their music for use.

In terms of parenting skills, this represents an emerging trend that is helping older generations bond with younger ones.

Pop parenting, which is when a parent and child share a common interest in music, movies or books, has also presented opportunities for fathers and mothers to broach certain subjects that may be difficult to bring up in conversation otherwise.

It’s been reported that some fathers have used certain albums or movies to talk to their teenagers about drug use and practicing safe sex (or in some cases offering examples of why it’s good to remain abstinent).

However, fathers should use their parenting skills and be sure not to force their interests onto their child. It may be easier to speak to your son or daughter, determine what they are into and go from there. Eventually, this can lead to both generations sharing their favorite music and movies.