I’m neither a mom nor Chinese, but, of course, had to read Friday’s headline article in the Wall Street Journal. By now, someone has probably sent “Why Chinese Mothers are Superior” by Amy Chua, to you a half dozen times. You can find a link to Superior Chinese Moms at Huffington Post to read the whole thing. Here’s an excerpt to give you an idea: 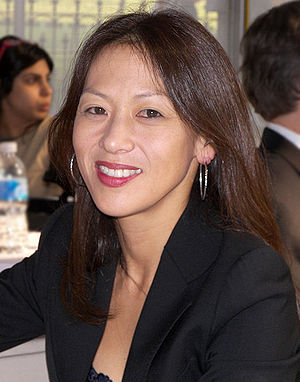 A lot of people wonder how Chinese parents raise such stereotypically successful kids. They wonder what these parents do to produce so many math whizzes and music prodigies, what it’s like inside the family, and whether they could do it too. Well, I can tell them, because I’ve done it. Here are some things my daughters, Sophia and Louisa, were never allowed to do:

• be in a school play

• complain about not being in a school play

• choose their own extracurricular activities

• get any grade less than an A

• not be the No. 1 student in every subject except gym and drama

• play any instrument other than the piano or violin

• not play the piano or violin.

First, that Western parents aren’t strict enough with their kids, and only by badgering them constantly while depriving them of all distractions can kids ever achieve the results that build self-esteem and make them truly happy. Ms. Chua cites studies that say that Chinese parents spend approximately 10 times more time drilling academics than their Western or Westernized counterparts, who often put an emphasis on sports activities. In fact, 70% of Western moms said that either ” stressing academic success is not good for children” or “parents need to foster the idea that learning is fun.”

Second, Ms. Chua thinks that calling a child a “loser” for getting a bad grade or calling him “fatty” is a way to motivate the child and symbolizes the intense desires you feel for them to excel. She admits that when her father at one point called her “garbage” for disobeying, she was ashamed for what she had done. In Ms. Chua’s thinking, this did not however, damage her self-esteem.

Third, she thinks that Western parents make a bad deal with their kids, for whom they sacrifice a lot, but from whom nothing much is expected in return. By contrast, Asian parents make kids understand that the parents have sacrificed fully for the kids and they expect reciprocal treatment when the kids grow up. Each generation is sandwiched taking care of its kids and parents as part of the grand bargain.

The article is fascinating reading, and I guarantee that it will make you question your own parenting philosophies. This is especially true if you’re now only sporadically motivating your baby Mozart to practice piano only 30 minutes a day (Ms. Chua’s daughters practice three hours and one played at Carnegie Hall in 2007).

Here are some of my reactions:

1. First: Wow! It’s hard to believe anyone in the 21st century would say, “here’s why my nationality is superior,” but the headline did get my attention and Ms. Chua has books to sell. Americans have learned over the last 30 years to admire Asian values that stress hard work and family loyalty, but I’m always suspicious of anyone thinking they are superior. In the 21st century, we are almost too aware of the potential strength of China, not only due to it’s size, but the determination of its people. Additionally, several generations of college applicants have watched Asian students gain college entrance and excel at far greater rates than their population representation. Non-Asians rationalize that the Asian kids miss out on all the fun, but they seem not to miss out on the success. At a dinner party the other night, a Chinese couple told the joke among their kids’ high school class that the “A” grade just stands for “Asian.” They thought this was very funny, while the non-Asians laughed nervously.

2. While many ethnic and religious groups claim a monopoly on guilt and shame, no one group has the exclusive rights. From our own experience or those around us, we all know it can be a real motivator for some people. For others, it’s just a long route to eventual depression and/or suicide, but that’s another story. Ms. Chua is able to twist shame and ridicule into just another way of saying “I love you,” but I found it hard to buy her story. I know too many high achievers who never felt their moms and dads loved them, or really understood who they were. I strive not to be the subject of my kids’ psychoanalysis years from now.

3. I feel tiny in comparison to Ms. Chua’s dedication and selflessness when it comes to parenting. But then again, she’s also a Yale professor and author. This is one energy-packed lady. For me, standing over my daughter for 30 minutes of piano is a long slog, and three hours almost unimaginable, especially since she is also doing soccer two to three times per week. My daughter will get to Carnegie Hall, but it may be just to see a performance of one of Ms. Chua’s daughters. I lack the energy, but also what I feel would be the meanness to say no to playdates and the occasional round of Wii Mario Kart. Am I a bad dad then? One of these overly permissive parents who destroy their kids for all hardship later on? It’s hard not to think so while reading Ms. Chua’s article. I challenge you to try.

These are very real cultural differences and obviously run completely counter to how most Americans see the role of parenting. I’d like to be a better more motivating parent, but I wouldn’t do it at the cost of tears as I browbeat my kids to think they are disappointing me in every minor failure. Culturally, shame and guilt are non-starters for our generation as we’ve watched countless friends go through therapy to overcome their upbringing and have watched the techniques parodied countless times on TV. Like in a lot of things in life, the news is often about the one time the technique worked rather than the thousands sacrificed along the way who didn’t rise to the challenge of being called “fatty.” On the other hand, we all try to teach our kids the value of hard work, over-coming adversity and delaying gratification. The Chinese or Asian way does do a better job at delaying gratification, but it’s hard to know in this system when it is supposed to come. Isn’t this just another way to teach kids that there is never a “there” to get to, that the fun can’t be in the journey, but always in some unattainable goal?

That said, my daughter and I discussed her piano and how much she needs to play and increased it to one hour per day (after she accused me of re-reading the Asian Mother article). If nothing else, this article is a good New Year’s reminder to be a better parent, stay on top their homework and grades, and help them learn the lessons of success, hopefully without resorting to calling them a “loser.”