Researchers at the Centre for Biomedical Ethics at the University of Birmingham believe that dad’s involvement in pregnancy and childbirth might actually be setting him up to fail as a new father. Here’s the logic: These days men are expected to really go through the pregnancy and birth with their partners– attend “antenatal classes,” and assist during labor. But hard as he may try the fact is he’s not the one doing the work. So he begins to feel like a passive, useless partner and this lack of mojo carries over into actual parenthood.

“It can then be very difficult for him to regain faith in himself once the baby is born” says Dr. Jonathan Ives, co-author of the paper, “and move from that passive state to being a proactive father.”

[From Should Dads Attend Births? | Being Pregnant]

I just don’t know what to say about this. I just can’t imagine anyone thinking this could be a good idea though this theory keeps coming up. There area also those who are adamant that men should stay away from women’s vagina’s during childbirth since they might never be able to look at their wife sexually again.

In this article, the author, a childbirth educator, sympathizes with the point of view, but ultimately rejects it for the same reason I would. Sure, it might be easier to keep men out of the delivery room and let women’s labor be women’s work. 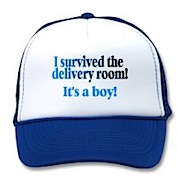 Involved dads feel empowered and proud of the experience because it is so primal and different than anything we do in modern life. And, as opposed to alienating men from their role as involved fathers, delivery room attendance, in my belief, strengthens it. Labor and delivery together set the stage for a lifetime of doing things together with and for your kids, including feedings, changings, and eventually worrying about them on their first date.

I would not have missed out on the birth of our two kids for the world. The process is natural and miraculous and nothing can prepare you for it. A dad should be there to be the first one to embrace the new child that he helped bring into the world. Anything else would be denying dad’s role, and ultimately his rights to the future with his children.