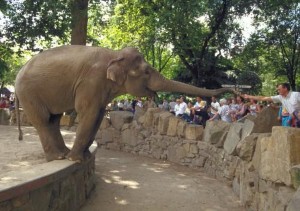 Although your kids will swear to you that there’s nothing they hate more than school, chances are they’re incredible restless and agitated during the long summer months. Let’s be honest, there’s only so much The Price Is Right you can watch before becoming you’re completely disinterested in the price of Advil and are no longer outraged by the contestants who guess $1 during the showcase showdown.

But because of your busy work schedule and watching tight pennant races throughout the baseball season, there’s not always time to take the kids out somewhere and release a little energy. Instead, you’d better have plans for the weekend, or your children are likely to explode like a bottle of Mentos and Diet Coke (Aside: be sure to keep your kids away from Mentos and Diet Coke).

Every kid can enjoy a trip to the zoo, but sometimes fathers, as well as their children, need a reminder to be on their best behavior before interacting with fellow members of the animal kingdom.

If you’re planning on a trip to the zoo this summer, remember the following "Don’ts."

1.) Don’t try to teach the parrot how to meow, bark or moo. Yes, a parrot making another animal sound is hilarious, but you’d be contributing to a community of very confused youngsters and low graduation rates for years to come.

2.) Good advice: Think independently. Bad advice: Signs are for suckers who aren’t getting their money’s worth. It doesn’t matter how hungry the gorillas look or how awesome a picture of you riding a kangaroo would be. Just don’t.

3.) Don’t see who can hold their breath longer than the hippo. Humans may be at the top of the food chain, but there some other events in which animals make poor competitors. Other examples include playing chicken with a rhino, thumb wrestling with a grizzly bear, and having an ant-eating competition with an anteater.