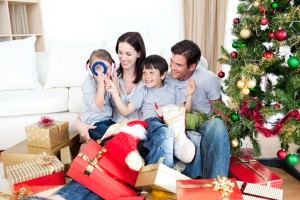 With Christmas less than a week away, dads everywhere are gathering with their little ones to stoke the fire, hang the last Christmas tree decorations and enjoy classic Yuletide films. As a family-oriented holiday, Christmas films often depict dad going above and beyond to reunite with their families and give their children the best Christmas ever. Here are some timeless examples of the best Christmas movie dads you and your children are sure to love.

Scott Calvin – The Santa Clause
Tim Allen has made a career off family Christmas movies, and it all began as Scott Calvin in The Santa Clause. As a distracted, workaholic dad, Scott doesn't seem to have time to give his son, Charlie, the Christmas he deserves. After a startling noise awakens them on Christmas Eve, Scotts runs outside and accidently causes Santa Claus to slip and fall off the roof – disappearing within his red suit. Not knowing what to do, Scott dons the red coat and inadvertently becomes the newest Santa Claus.