(Los Angeles, CA) – First Look Studios proudly announces the DVD release of Birds Of America, a comedy that explores the relationships between siblings and how they come together as a family despite their differences. 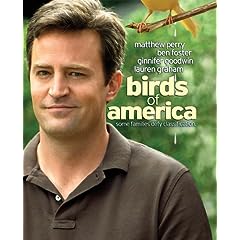 Morrie (Matthew Perry, “Friends”) is no stranger to unconventional families. After his parents
passed away during his childhood, he was left to care for his little
brother, Jay (Ben Foster, 3:10 to Yuma, X-Men: The Last Stand), and his sister, Ida (Ginnifer Goodwin, “Big Love”). Jay is beyond peculiar, homeless and humorously, but clinically,
depressed. Ida is a promiscuous insomniac and
sometime photographer that is starved for attention. Morrie’s wife Betty (Lauren Graham, “Gilmore Girls”) has waited
patiently for seven years for their hard work to pay off so they can
start a family.

When his siblings fail to take
flight in adulthood, Morrie begins to find his role as caretaker much
overdue. Irresponsible and emotionally destructive, Jay and Ida feel a
certain comfort from each other that only family can bring. To balance
out their instability, both siblings seek refuge at Morrie’s home while
he suffers in quiet desperation. Between Ida’s late night trysts and
Jay’s comedic antics, Morrie watches his life unravel as his marriage
begins to go on the rocks and his dreams of tenure at the high school
fade away.

Faced with the choice of turning his back on his family or
standing by them despite their flaws, Morrie discovers the strength of
the ties that bind them and what it means to be a family. Birds of America is available on DVD on October 21, 2008 at an SRP of $28.98.

Win a Birds of America DVD. Just tell us what’s the funniest story you’ve heard about siblings. Send in
your entries using the comment form below. Contest ends on 20th October, 2008.