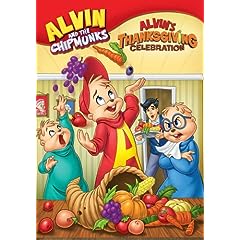 Celebrate Thanksgiving Chipmunk style with these fun-filled original episodes from Alvin and the Chipmunks. On this DVD, the world-famous Chipmunks, Alvin, Simon and Theodore perform in a play, recall famous moments in American History, take care of a kitten and face the marriage of Dave!

Win an Alvin and the Chipmunks DVD. Just tell us what’s the funniest story you’ve heard about Thanksgiving celebrations. Send in
your entries using the comment form below. Contest ends on 3rd November, 2008.
Read the rules and regulations.