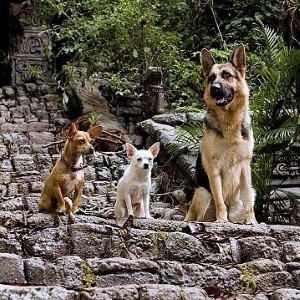 Child-friendly? Great for all ages.

Let's face it: Chihuahuas are the worst. They're tiny, they're ugly, and they're often carried around in handbags. Give dads a pit bull named Spike any day of the week, but canines named Miffy that look like rats can take their business elsewhere.

None of this really matters though, considering your kids are going to beg you to rent Beverly Hills Chihuahua 2 as soon as the DVD hits the shelves, and you're going to have no choice but to indulge them. That's the problem with children – as soon as they develop respectable movie taste they become convinced you're the anti-Christ.

Beverly Hills Chihuahua 2 is the sequel to the original film, a title which you can probably figure out for yourself. The story follows dogs Papi (George Lopez) and Chloe (Odette Yustman), who are now married with five pups of their own. Before you can say "vicious Rottweiler," the furry family is doing everything they can to save their human owners from destruction.

Yes, the kids will eat this up like dog biscuits. And sure, for those under the age of 10, it's entertaining. Still, the main complaint is the obvious one – too many Chihuahuas. The next time one of those 3-pound pups appears on our boob tube, he better be sitting next to a heap of tortilla chips and giving his their best pitch for Taco Bell.

Child-friendly? Beverly Hills Chihuahua 2 tells the story of two little dogs who do all that they can to help save their owners. The film contains a lot of action-packed scenes that are appropriate for all youngsters, talking animals and way too many Chihuahuas. Recommended for all ages, although adult dads may want to watch with caution.