Dazzling animation, groundbreaking special effects and award-winning music earned Mary Poppins five Academy Awards®, including Best Actress and Best Song. The new two-disc DVD features hours of captivating bonus material, including the all-new “Mary Poppins: From Page to Stage”, a fascinating feature that takes audiences backstage for an exclusive look at the making of the Tony Award winning musical, and “Step in Time,” a never-before-filmed musical number performed by the original Broadway cast—also downloadable as an MP3 audio file. Bonus materials also include the ultimate “behind-the-scenes” movie documentary and reminiscences of the film’s stars and legendary composer Richard Sherman. 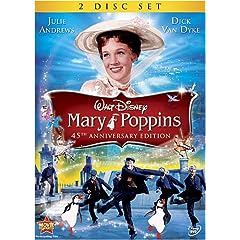 With its revolutionary blend of live action and pioneering Disney animation, Mary Poppins became an instant hit and was nominated for the Best Picture Oscar®. The film stars the incomparable Dame Julie Andrews, who won the 1965 Best Actress Academy Award for her film debut, and Dick Van Dyke as Bert, the dancing chimney sweep.

Based on the popular children’s stories by P.L. Travers, Mary Poppins has won the hearts of generations of kids and their parents with its enchanting tale of a magical nanny who changes the lives of two rowdy but neglected kids with determination, discipline and “Just a Spoonful of Sugar.” Mary Poppins (Julie Andrews) takes Jane and Michael Banks (Karen Dotrice and Matthew Garber) on magical, musical outings including a play date with adorable animated penguins, a race through the country side on merry-go-round horses and a trip across the rooftops of London on a stairway made of smoke—and always gets them home in time for dinner! With her foolproof mixture of good manners and unpredictable fun, Mary not only introduces order to the chaotic Banks household, but brings the whole family together in the process.