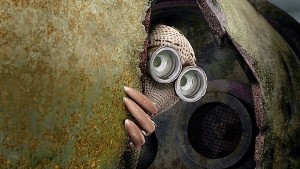 Child-friendly? Although 9 was produced by Tim Burton, this film is more violent and darker than many other animated films associated with the director’s name. The presence of killer robots and the threatening atmosphere in which small dolls must fight for their life mean that the movie is most suitable for teenagers aged 13 and up. There is no sexual content or swearing.

The animated movie 9, based on a short film that was nominated for an Oscar in 2005, transports viewers to a dark future in which humanity has virtually been destroyed.

Elijah Wood voices the role of a ragdoll-like creature named 9 who awakens to discover that his creator is dead and decides to see what else exists in the world.

In addition to meeting other creatures like him – and who also have numbers for names – 9 must battle deadly robots who seem bent on his destruction.

Fathers who are science fiction fans may be attracted to the impressive visuals and stark post-apocalyptic world portrayed by this Shane Acker-directed film.

But they should also know that the plot is sparse and rather short on character development, relying more heavily on battles between giant robots and the group of dolls – which can easily scare younger children.

However, although its atmosphere is dark, the movie has a message of hope at its heart and the main character shows bravery amid a bleak and threatening backdrop.