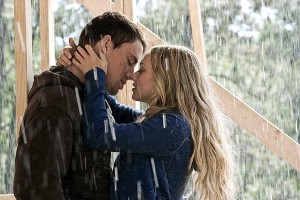 Child-friendly?Dear John is a romantic drama about a soldier who falls in love with a conservative college student. The movie is based on a Nicholas Sparks novel and contains many of the tear-jerking moments found in similar Spark-inspired movies like The Notebook. The film contains some non-graphic sexuality and some scenes depicting wartime violence but is a relatively tame love story that is appropriate for teens aged 13 and older.

Dear John is the story of a Special Forces soldier, John Tyree, who falls in love with a selfless, idealistic college student, Savannah, while he’s on leave visiting his family. The couple plans to spend the rest of their lives together after John finishes up his tour of duty in a year, but 9/11 intervenes and the duo’s reunion is postponed after John’s unit volunteers to re-enlist for additional years.

The two keep in touch through letters during their time apart but their love is put to the test during John’s extended military deployment. In true romantic drama fashion, the couple has to deal with a lot of obstacles that keep them apart.

The film is directed by Lasse Halstrom and stars Channing Tatum as John and Amanda Seyfried as Savannah. The lead actors will most likely appeal to teenaged audiences, even if they don’t know anything about the story.

Dear John’s PG-13 rating is due to some sensuality, violence and a few instances of bad language use. There is no nudity, although the college-aged couple does share some intense kisses and a night together.

Some fathers may find the story of Dear John far-fetched, but could use the movie’s message of sacrificing for others to start conversations with their teens. Families may also use the movie to initiate talk about real-world issues during wartime.