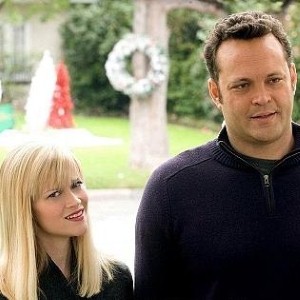 Child friendly?: A lot of the laughs in this film come in the form of family dysfunction, fighting or sexual innuendo, making it most appropriate for children 14 and up. The gags are often cartoonish, which softens their impact a bit, but the script has not been written with small children in mind.

‘Tis the season for holiday movie-watching, when dads, moms and kids venture out to the theater in the hopes of finding a special cinematic present that the whole family can enjoy.

At first glance, Four Christmases seems to be marketing itself as this type of entertainment. However, parents should be aware that it is a film which derives most of its chuckles from familial dysfunction, sexual innuendo and rather juvenile physical comedy.

The plot centers on Kate and Brad, a San Francisco couple who have a holiday tradition of telling their extended families they are doing charity work in a far-away place to avoid spending Christmas with them – then they enjoy a vacation at a plush resort instead.

One year, flights are grounded due to fog, and Kate and Brad end up on the evening news, exposing their deception.

The rest of the film shows the couple dutifully making the rounds to four different Christmas celebrations – filled with eccentric divorced parents and other wacky family members – and learning that they may not have as much in common as they originally thought.

Fathers may find themselves laughing out loud at several scenes in this movie – but you may want to make sure your kids are old enough to handle the humor as well.