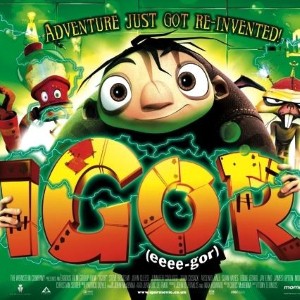 Kids who love the playful wickedness of Tim Burton’s The Nightmare Before Christmas or Lemony Snicket’s A Series of Unfortunate Events will be clamoring to see Igor – and fathers may also enjoy its mild dark humor.

However, one Igor in particular has greater dreams: he wants to be a scientist himself. In fact, he has already created an indestructible rabbit and a dim-witted brain in a jar, as well as planning to bring a female monster to life.

This film, appropriate for children aged six and over, does not contain any material that most parents would find objectionable, though there are a few cartoonish scenes of death and attempted suicide – and, of course, monsters galore.

Kids are likely to enjoy the sweet-natured plot and colorful graphics, while adults may chuckle over the myriad of references to Frankenstein and other classic scary movies, as well as a character who is fixated on the musical Annie.