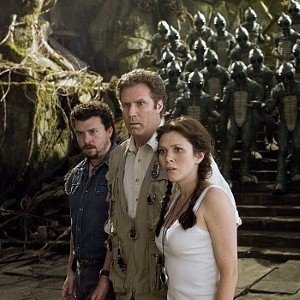 Child-friendly?There is a lot of different types of humor packed into this PG-13 film, some of which may make some fathers hesitant to allow their young teenage son or daughter to see the film. There is vulgar language and drug use (even though it may technically be off of pre-historic herbs). And because of comedian Will Ferrell, fathers can expect a fair amount of questionable humor including one scene where the actor douses himself in dinosaur urine as a survival tactic. Because of the fine line it walks, the film is probably appropriate for teenagers ages 16 and up.

The classic 1970s television show about a family lost in another dimension receives the big-budget Hollywood treatment with the new Will Ferrell film that opens on Friday.

In the updated version, Ferrell plays Dr Rick Marshall who has been shunned by the scientific community because he’s spent most of his career talking about wormholes and time travel. His antics lead him to be a tour guide at the La Brea tar pits, which is where he’s met by Holly Cantrell (Anna Friel), who tells the doctor she believes his theories and that he should finish his dimension-spanning project.

The two determine there’s a weak spot between worlds near a souvenir stand located in the desert which is run by a man named Will Stanton (Eastbound & Down’s Danny McBride). Soon the three characters are transported to the Land of the Lost, where they meet dinosaurs and angry lizard-like men.

There’s a lot of crude humor in the film including a scene where an egg has to be removed from a massive pile of dinosaur feces. Another scene has one of the characters being swallowed by a dinosaur only to come out of the animal’s rear-end.

The popularity of Ferrell will make this a must-see movie among teenagers, so fathers should use their parenting skills when deciding if they feel it’s appropriate for their son or daughter.