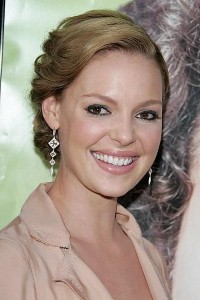 Katherine Heigl obviously wants to be the next Julia Roberts, who succeeded at being the Katharine Hepburn of the nineties. The girl from Grey's Anatomy obviously has big shoes to fill.

She's not going to accomplish the task with Life as We Know It, a romantic comedy that is neither romantic or a comedy. Discuss.

Heigl stars as Holly Berenson, a woman whose best friend, Alison (Christina Hendricks), dies in a car accident along with her husband, Peter (Hayes MacArthur). The couple leaves behind a will, stipulating that Holly raise their 1-year-old daughter along with Peter's best pal, Eric Messer (Josh Duhamel).

If you can't guess what happens next, well, you probably haven't seen the thousands of commercials that have been airing recently, have you? Holly and Eric hate each other, yet they stifle their loathing and move into a sprawling mansion in order to watch the little tot grow up. Still, when the baby goes poo-poo, the pair almost lose it. Will these two ever work things out? Will they ever get together?

There's nothing worse than a predictable romantic comedy, and this is as obvious as it gets. Also, Eric goes from the worst dad on the planet to the best faster than you most of us can say "you're grounded."

If there's one positive thing to come from Life as We Know It, it's this – the entire family will finally agree on a movie's suckiness. It's not funny, the plot is ridiculous, and the 115-minute running time feels like five hours. The film will also give a family a whole two hours of dinner discussion at the least.

Of course, there's one aspect of the film dads can enjoy – Christina Hendricks' two babies.

Child friendly? Life as We Know It tells the story of two dimwitted people whose best friends die in a car accident. The couple leaves behind a 1-year-old tot and their will demands that their two friends raise her together. Once living under the same roof, the pair realize that poop grosses them out and they thoroughly hate each other. The film contains some sexual scenes, drug use and swearing.