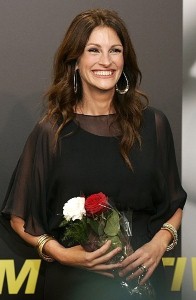 Child-friendly? This update on a classic Brothers Grimm fairytale blends humor and fantasy in a way that young children and adolescents will equally enjoy.

My first few questions about this film all begin with "why?" Why is Hollywood intent on rehashing old fairytales? Why is Julia Roberts starring in this film? And why would anyone in their right mind willingly go see this movie? Well, "willingly" has a loose definition when you're the proud parent of a child anywhere between toddlerhood and age 15. Until your children reach their prime teenage years and begin seeing horrible films on their own time, you'll have to grin and bear it through every half-baked kiddie film that comes your way.

OK, enough abstract griping – here's what you're getting into with Mirror Mirror. Just like the hyper-stylized bomb Red Riding Hood that came before it, Mirror Mirror is another "edgy" reimagining of a classic Brothers Grimm fairytale. This time around, fake-laugh-and-scream enthusiast Julia Roberts (watch Ocean's 11 again, you'll see what I mean) portrays a decidedly neurotic version of the evil Queen Clementianna who just can't deal with the fact that's she's not the prettiest girl in all the land. Rather than read a self-help book or work on developing a personality, the Queen attempts to feed her competition, Snow White (portrayed by Phil Collins' super-adorable daughter Lily Collins), to a horrible woodland beast while taking control of the kingdom. Luckily, Snow White is rescued by a group of seven exceptionally short highway robbers, and they devise a rebellious plan to stick it to the man…er, woman.

Unfortunately, you might be longing to watch the Disney animated version not long into this movie. Your kids are sure to have a good time (that's the most important part, I suppose), but this film is certifiably groan-worthy as far as adults are concerned. If you need to blow off some steam after this train wreck, go smash a copy of Roberts' last crime against cinema – Eat Pray Love.

Child-friendly? Kids can never resist a modern update on a time-honored fairytale, so expect them to be begging you to go see Mirror Mirror the second it comes out. Luckily, slapstick humor, a bumbling villainess and the cutest Snow White ever make this film appropriate for children of all ages. Unfortunately, they all make Mirror Mirror an incredibly mediocre movie. If you're looking for a truly edgy remake, wait for Snow White & The Huntsman to premier later this year.