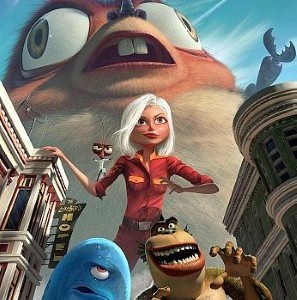 Child-friendly? The cartoon violence of this animated feature may be a little too intense for younger children, especially one instance where someone is accidentally shot with a gun. The language doesn’t get much stronger than words such as "stupid" or "jerk," but there is some mild sexual content, though it is between a blob and plate of Jell-o. The film is probably appropriate for kids 10 and up.

Monster vs. Aliens brings the same light-hearted fare that animated movies such as Kung-Fu Panda and Shrek have brought in the past.

The premise centers on a group of monsters quarantined by the US government and then called upon to save the world from an alien invasion. The band of societal rejects includes a blue blob named BOB (voiced by Seth Rogan), an over confident half-man and half-fish called the Missing Link (Will Arnet) and mad scientist Dr. Cockroach, Ph.D. (Hugh Laurie who uses his British accent). Susan (Reese Witherspoon) breaks up the boy’s club with her 50-foot tall female powers.

The monsters face off against an evil alien (Rainn Wilson) who is determined to take over earth and who has unleashed a destructive robot onto San Francisco.

While the comedy can be enjoyed by kids and adults, there may be too much cartoon violence for children younger than 10 years old, especially with a gun going off at one point and killing one of the bad guys. This may be particularly scary for children watching the 3-D version.

However, parents of young girls may appreciate the self-confidence Susan finds towards the end of the film, which may be an uplifting message.