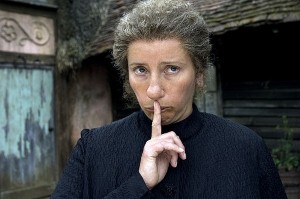 Child friendly? Recommended for ages 5 and up

How could a woman so unsightly be so beloved by kids? That’s the conundrum with Nanny McPhee Returns, the sequel to the film about an oogly au pair who rescues a harried British mom from going off the deep end. The film isn’t half bad, but the Nanny’s warts are a different story.

The movie stars Emma Thompson, who also wrote the script, and has certainly seen better days. Her Nanny McPhee (small ‘c,’ big ‘P,’ she continually reminds us) starts off as hideous as possible – she sports a large nose, a mess of raggedy hair and a snaggletooth that could cut through a diamond.

It’s a good thing the engrossing story keeps things going. McPhee magically arrives at the doorstep of Isabel Green (Maggie Gyllenhaal), a mom living in the English countryside who is about to go completely wacko. Her husband is away at war, and she’s the soul caretaker of her three children and their stuffy cousins, Cyril (Eros Vlahos) and Celia (Rosie Taylor-Ritson). The latter two hail from a rich family, drink with their pinkies in the air and are little Robin Leaches in training.

Pretentiousness aside, kids will absolutely love this one. Between scenes involving pigs swimming and dancing, statues coming to life and an overabundance of the word ‘poo,’ children under the age of 12 may be rolling in the aisle. And, the nanny’s wicked appearance aside, dads may very well be as well.

Of course, parents should be forewarned that the story, which takes place during World War II, involves some serious discussion about bombs and dying. When the family receives a letter explaining someone has been killed in action, they refuse to believe the news. It goes without saying that little kids enjoying the lighthearted fanfare may be sidelined.

Still, there’s good news – every time McPhee teaches the children a new lesson, one of her gross characteristics disappears. She makes the little ones say please and thank you and – poof! – her warts are gone. After the little rugrats refrain from roughhousing, her hair loses its frizziness. By the end of the film, she’s looking pretty decent.

If only the bar scene back in the day were that easy.

Child friendly? Nanny McPhee Returns is the sequel to Nanny McPhee, a surprisingly fun story that involves a hideous woman and a lot of use of the word ‘poo.’ It tells the tale of a Mary Poppins-like character who magically appears to help a family when chaos ensues. Each time she teaches the misbehaving children a lesson, McPhee loses one of her unattractive qualities. The film is a delight for kids and parents will get a kick out of the quick-paced dialogue. However, themes such as death and war are tackled in the tale.