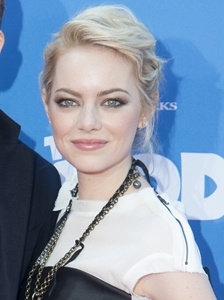 Child-friendly? "The Croods" has a brand of slapstick humor that certainly lives up to its name, and the constant barrage of prehistoric humans in modern day situations is sure to keep your little ones giggling through the movie.

In case you were wondering what Nicholas Cage has been up to lately – outside of being a perpetual punch line and meme on the internet – look no further than "The Croods," Dreamworks' latest effort to prove that Pixar is the far superior CGI children's studio.

Featuring a bumbling band of cavemen finding themselves in distinctly un-prehistoric calamities, this floundering film essentially takes the plot of Ice Age and dials down the intelligence factor a bit. Though I suppose if there was one group Nic Cage – who voices father Grug – was fit to lead, it would be a group of prehistoric dolts.

Following the demolition of their home/cave, the Neanderthal Crood family must venture outside of their slice of paradise into previously unexplored territory to find a new abode. While Grug is distrustful of anything new, strange or adventure-related, his daughter Eep (voiced by Emma Stone) is far more curious in the outside world.

Soon, the Croods meet a human named Guy (voiced by Ryan Reynolds), who reveals the mysterious power of fire to the family. Though Grug is concerned about accepting help from this unusual human, he forcibly takes Guy along as their guide through the wilderness. Along the way, they encounter numerous creatures and lands the Croods had never imagined in their wildest dreams, discovering the age-old cliche that pulling together as a family can get you through anything.

As a parent, I can safely say that, family messages aside, your kids are likely to pick up some bad ideas from this movie. At every turn, one of these dimwitted Neanderthals is setting whole forests on fire or stumbling into the clutches of a dangerous predator. You might want to keep an eye on your little ones to prevent them from destroying your home after a viewing of "The Croods."

After all, how many life lessons do you want your kids learning from a group with names like Ugga, Thunk and Belt? Or worse! Nicholas Cage. All I'm saying is … invest in some bike helmets.

Child-friendly? With plenty of prehistoric danger, eye-popping CGI effects and cavemen being tossed, burned, smacked and punted in "The Croods," it's safe to say that this one is going to be a crude hit for the little ones in your family.