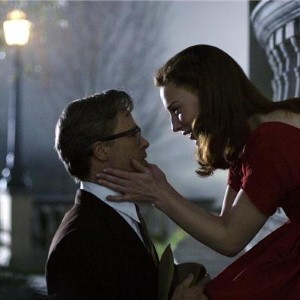 Child friendly?: This is definitely a movie with some philosophical themes, such as the meaning of life, death and love. However, mature youngsters may still find themselves entertained by the compelling story. There is some wartime violence, use of tobacco and alcohol, and occasional swearing. The romantic scenes never become overly explicit. Probably most appropriate for kids 12 and up.

Fathers may enjoy taking their teenagers to see The Curious Case of Benjamin Button, which deals with many of the great themes in life: living, dying and loving.

The premise of the film is that Benjamin lives his life in reverse to the rest of us, beginning as an elderly man and aging backward to eventually become a toddler.

With an epic plot that stretches across the entirety of the character’s life, the movie has been compared to Forrest Gump, who is also a passive man and carried along by events.

Along the way, Benjamin becomes interest in a young girl named Daisy, whom he subsequently meets at various points in time, with each of them moving in opposite directions on life’s timeline.

The emotional impact of the movie is largely derived from the knowledge that the two lovers cannot continue a traditional relationship, due to the unusual nature of their situation.

For this reason, older teens and adults are more likely to be moved by the story, because they may understand better what it feels like to let go of things they love.