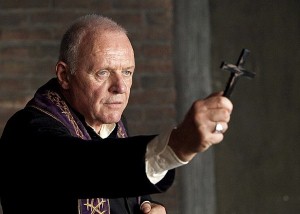 Child friendly? Recommended for ages 15 and up.

It's been 20 years since Anthony Hopkins brought Hannibal Lecter to life in The Silence of the Lambs, and it turns out the guy is still insanely creepy. Over the past two decades the Brit has played an array of saintly characters, but it's safe to say most of the world will remember him for chowing down on human flesh and scaring the crap out of Jodie Foster.

His performance in The Rite doesn't require half as much intensity – this is a PG-13 movie folks – but the actor proves he still knows how to send a chill up audience members' spines. Don't take the meek to this one – Hopkins' sinister stare might make bedtime even more difficult than usual.

The Rite tells a familiar tale – Michael (Colin O'Donoghue) is a seminary student who travels to Rome to study with Father Lucas (Hopkins), an experienced exorcist. Once there, the pair attempts to coax the devil out of a pregnant teen.

While that plot development alone would be enough to make any dad reach for the xanax, the real horror kicks in soon thereafter. For good measure, we are also introduced to Angeline (Alice Braga), a super-hot journalist who wants to learn more about Lucas' devil-dumping ways.

Still, it's Hopkins alone who sells this one. He may be considered a knight across the pond, but in the states he'll be feasting on fava beans and Chianti until his dying day.

Child-friendly? The Rite tells the story of Michael, a seminary student who travels to Rome and soon meets Father Lucas, an experienced exorcist. The elder man of cloth soon takes his new protégé under his wing and attempts to teach him the ways of ridding a person of the devil. The film contains language, violence, and scenes with intense action. Recommended for ages 15 and up.