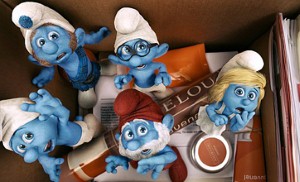 Hollywood always has a way of adding a "realistic spin" to a beloved classic tale, and the trend rears its ugly head once again in the latest family friendly flick to hit theaters – The Smurfs. Here, those little blue creatures struggle to break free from Gargamel's grasp and somehow end up being transported through space via a portal that takes them to New York City.

Although it's nice to catch a whiff of '80s nostalgia through the franchise that practically had a monopoly on Saturday morning, dads should also be prepared for a two-hour cheese-fest sprinkled with bits of blue.

Hank Azaria remains the highlight of the film. Evolving from his recent quirky roles in Mouse Hunt and Year One, the actor unleashes his dark side as Gargamel, an evil wizard who seems to have a verging-on-creepy love-hate relationship with his cat, Azrael. Azaria, the man who voiced Apu from the Simpsons, hasn't been this captivating since his turn as Agador in The Birdcage.

Neil Patrick Harris, who plays Patrick, the oblivious human who gets stuck with the Smurfs, does a decent job tackling the role of a soon-to-be father. Even though most dads might prefer to see a character who bumbles his way through the situation with foolishness and paranoia (Hugh Grant in Nine Months, anyone?), Harris's portrayal provides a somewhat more realistic and lighthearted take on the uncertainties one faces at the start of raising a family.

Child friendly? The Smurfs take us from fairy tale land to the real world as Gargamel and his eccentric cat attempt to hunt those little blue creatures down and use them as a secret ingredient for a magic potion. If you wish to entertain the children with a movie that won't leave you counting down the minutes, The Smurfs might just be your calling for the day. The film contains mild humor and action.