Los Angeles, CA – December 8, 2008–National Lampoon, Inc. along with Paramount Home Entertainment and filmmaker Adam Rifkin, take viewers back to a time before time was invented in “National Lampoon’s Stoned Age”, a rude, crude, and unapologetically ribald comedy coming to DVD on January 20, 2009.  Originally released in theaters as “National Lampoon’s Homo Erectus”, the film is the unabashed adventure of an upwardly mobile caveman who tries to singlehandedly forge another link in the evolutionary chain—but finds his tribe is more interested in partying than progress.  And if the hilarious R-Rated version isn’t outrageous enough, the “National Lampoon’s Stoned Age” Uncensored Unrated Edition offers an audacious orgy of sidesplitting post-holiday entertainment. 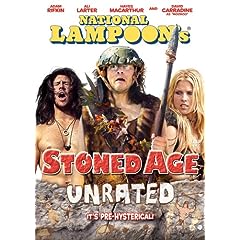 A 2007 Slamdance Film Festival favorite, “National Lampoon’s Stoned Age” tells the tale of Ishbo (Adam Rifkin), a visionary whose innovations are completely unappreciated by a world full of Neanderthals. His tribe laughs at his absurd inventions, which include the toothbrush, the ladder and pants, and his forward thinking ideas also utterly fail to impress the girl of his dreams, prehistoric hottie Fardart (Ali Larter). While he pauses to ponder the ethical implications of simply dragging her away by her hair, his studly but dimwitted brother, Thudnik (Hayes MacArthur) does just that.  And if that’s not bad enough, the enemy tribe on the other side of the hill is about to attack.  How does a guy who thinks outside the box survive in an era when boxes don’t even exist yet?  Find out in “National Lampoon’s Stoned Age”!