HOLLYWOOD, CALIF. (November 10, 2008) – Two best friends that
have lost touch and a foreigner in a strange land head into the wilderness on a hilariously
harebrained expedition when WITHOUT A PADDLE: NATURE’S CALLING comes exclusively to DVD and Blu-ray
from Paramount Home Entertainment on January 13, 2009. An uproarious follow up to the 2004 hit
adventure comedy Without a Paddle, this all-new movie marks the first feature from Paramount Famous
Productions, the studio’s recently launched made-for-home entertainment production division. It
stars Oliver James (What a Girl Wants, Raise Your Voice), Amber McDonald (You Tell Me), Madison
Riley (Bratz), Kristopher Turner (“A Dad for Christmas”), Rik Young (Beowulf), Ellen Albertini Dow
(Wedding Crashers) and former NFL wide receiver Jerry Rice in an anything-goes whitewater adventure
awash in laughs and thrills. The WITHOUT A PADDLE: NATURE’S CALLING DVD and Blu-ray include a boat
load of featured including deleted as well as a behind-the-scenes featurette. 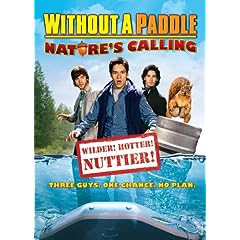 Everything that
can go wrong goes hilariously wrong when two best friends and one zany Brit venture out into the
wilderness in search of a high school sweetheart. On this trip, the stakes are higher, the river is
wilder and the creatures are nuttier! Trying to grant a last wish to a little old lady (Ellen
Albertini Dow), lawyer Ben (Oliver James) and nursing home attendant Zach (Kristopher Turner) join
forces with a wacky Brit named Nigel (Rik Young) in search of the woman’s missing granddaughter
whose last known address is—the wilderness. These three not-exactly-outdoorsmen demonstrate their
subsistence level survival skills in a series of sidesplitting misadventures sure to have audiences
camping out in front of the TV again and again.

The movie is
presented in widescreen enhanced for 16:9 televisions with Dolby Digital English 5.1 Surround with
English, French and Spanish subtitles. Total runtime is 90 minutes. The DVD includes: