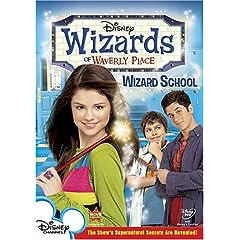 BURBANK, California, May 20, 2008 – What’s it like to suddenly discover that you have the most awesome magical powers ever? Three siblings find out in Wizards of Waverly Place: Wizard School, coming to Disney DVD from Walt Disney Studios Home Entertainment on July 29, 2008. For the very first time, four episodes of this spellbinding Disney Channel Original Series come together in one bewitching DVD with an amazing and exclusive bonus features.

Alex Russo and her brothers Justin and Max suddenly go from being your average, ordinary kids to discovering their family’s astonishing secret—they are wizards in training! Navigating the unpredictable politics of Wizards’ School, trying to control amazing new powers and fixing magic spells gone awry are just part of everyday life for these teenagers. With a red-hot young cast that includes Selena Gomez (guest appearances on Hannah Montana and The Suite Life of Zack & Cody), David Henrie (guest appearances on That’s So Raven and How I Met Your Mother) and Jake T. Austin (Johnny Kapahala), as well as Maria Canals-Barrera and David DeLuise, Wizards of Waverly Place conjures up nonstop laughs as these three siblings find themselves up to their necks in the art of wizardry.