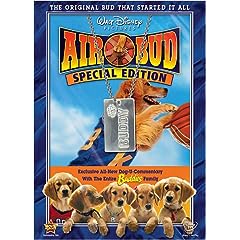 The original Bud that started it all is back in a new Special Edition featuring an exclusive Dog-U-Commentary with the entire BUDDIES family. Buddy, the sensational real-life hoop hound with 22,000 career baskets under his collar, stars in this hilarious and touching Disney comedy that critics and families cheered as irresistible family entertainment! When Josh Framm, a 12-year-old boy, finds himself in a new city with no friends, he’s too shy to try out for the basketball team. However, while practicing, he meets Buddy, a runaway golden retriever, who surprises him with his ability to score baskets. Josh and Buddy eventually make the school team, and the dog’s extraordinary talents spark a media frenzy — one that attracts Buddy’s greedy former owner who wants to cash in on the dog’s new found fame. Josh and Buddy have to stay one step ahead of the brute — and rally their school team to the state finals at the same time!

Bonus Features
Dog-U-Mentary with the Buddies:  Exclusive commentary from the Buddies on Air Bud—the story that started it all!

Win an Air Bud Special Edition DVD. To
enter
the contest, simply tell us your best money saving tip. Send in your answers using the comment
form
below. Last date for entries is March 3, 2009.

Contest Update: The contest is closed. See the winner’s page