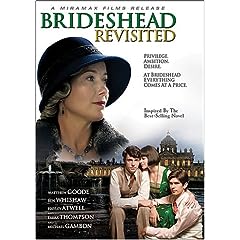 Charles Ryder (Matthew Goode), a young man of modest means but considerable ambition, has just begun his studies at Oxford University, when he encounters flamboyant aristocrat and fellow student Sebastian Flyte (Ben Whishaw). Infatuated with his new friend’s hedonistic lifestlye, Charles eagerly accompanies him to the family’s opulent mansion, Brideshead, where he becomes entranced by the eccentric clan and the palatial 18th century estate. But when Charles falls for Sebastian’s beautiful sister Julia (Hayley Atwell), his friend reacts with jealousy and the siblings’ domineering mother, Lady Marchmain (Emma Thompson), rules out the possibility of marriage for reasons of class and religion. As Charles becomes further involved with the Marchmain family, he realizes that at Brideshead, everything
comes at a price.

Win a Brideshead Revisited DVD. To enter the contest, simply tell us what you think is the funniest children’s poem you have ever read. Send in your answers using the comment form below. Last date for entries is January 15, 2009.