Burbank, California, February 20, 2009 – Two proper Englishwomen find romance, hope and renewal in the Italian countryside when Enchanted April makes its highly anticipated DVD debut on May 5, 2009 from Miramax Films. Enchanted April’s breathtaking scenery and charming story make it the perfect movie for anyone who has ever dreamed of an unhurried sojourn in Italy. The DVD includes audio commentary by the director and producer. 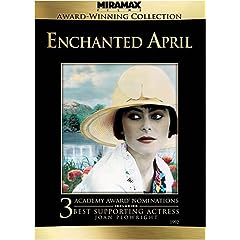 Josie Lawrence (Eastenders) and Miranda Richardson (Harry Potter and the Goblet of Fire) head a stellar ensemble that also includes Joan Plowright (The Spiderwick Chronicles), Polly Walker (Cane), Alfred Molina (Spiderman 2) and Oscar-winner Jim Broadbent (Best Supporting Actor, Iris, 2001). Gorgeous visuals and top-notch acting, directing and writing made Enchanted April an international hit and earned the film three 1992 Oscar nominations including Best Adapted Screenplay for screenwriter Peter Barnes, Best Supporting Actress for Plowright and Best Costume Design for Sheena Napier. In addition, the film received two Golden Globes, one for Richardson (Best Performance by an Actress in a Motion Picture – Comedy or Musical) and one for Plowright (Best Performance by an Actress in a Supporting Role) and was nominated for Best Motion Picture, Comedy or Musical.

In a temporary escape from their drab lives and inattentive husbands, Lottie Wilkins (Josie Lawrence) and Rose Arbuthnot (Miranda Richardson) rent a magnificent villa on the Italian Riviera. To be able to afford a month of this luxury, they must share expenses with two unlikely companions – Mrs. Fisher (Joan Plowright), a crusty widow living in the past and Caroline Dester (Polly Walker), a charming, but bored aristocrat. The mismatched housemates find that the spectacular villa and lush Italian setting hold a special magic that soon sparks friendships and reminds the women of ways to live and love that have long eluded
them. Gorgeously photographed and superbly acted, Enchanted April is like taking a little mini-trip to a sunny Italian paradise.

The Castle In Wisteria

Win
an Enchanted April DVD. To
enter
the contest, simply tell us which is the best low-cost vacation idea and why. Send in your answers using the comment
form
below. Last date for entries is May 6, 2009.