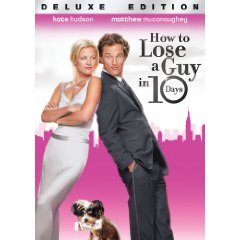 HOLLYWOOD, Calif. – The irresistibly funny romantic comedy How to Lose a Guy in 10 Days makes its move onto DVD and Blu-ray in an all-new Deluxe Edition arriving August 18, 2009 from Paramount Home Entertainment.  Pairing Matthew McConaughey (Tropic Thunder) and Kate Hudson (You, Me and Dupree) with delightful results, How to Lose a Guy in 10 Days is an uproarious battle of the sexes that appeals to both men and women. While Andie (Hudson) needs to prove she can dump a guy in 10 days, Ben (McConaughey) is determined to show that he can win a girl in the same amount of time. The result is a wildly outrageous tale of sex, lies and romantic fireworks.

The How to Lose a Guy in 10 Days Deluxe Edition DVD and Blu-ray feature new bonus material including “How to Make a Movie in 2 Years”, “Why the Sexes Battle” and “Girls Night Out”, as well as previously released features including commentary by director Donald Petrie, deleted scenes with optional commentary by Petrie and a music video of Keith Urban’s “Somebody Like You”.

The How to Lose a Guy in 10 Days DVD is presented with the following special features in high definition as noted:

Win a How to Lose a Guy in 10 Days Deluxe Edition DVD. To
enter
the contest, simply tell us which is the most embarrassing scene in a movie that you’ve watched with kids and why . Send in your answers using the comment
form
below. Last date for entries is August 6, 2009.