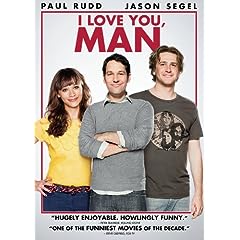 HOLLYWOOD, Calif. – Paramount Home Entertainment invites you to make a man-date on August 11, 2009 when the unforgettable bro-mantic comedy I LOVE YOU, MAN debuts on DVD and Blu-ray.  Paul Rudd (Role Models, Knocked Up) and Jason Segel (Forgetting Sarah Marshall) are “howlingly funny” (Peter Travers, Rolling Stone) in “one of the funniest movies of the decade” (Steve Oldfield, “Fox -TV”), a story of a guy with no male friends who finds himself in need of a best man.  After a series of awkward outings, Peter (Rudd) finally bonds with fun-loving Sydney (Segel).  Rudd and Segel’s “bro-mance” takes male-bonding to hilarious new heights in a story that comically explores what it truly means to be a friend.

The I Love You, Man DVD and Blu-ray presentations include commentary by director John Hamburg (writer, Meet The Parents, Zoolander) and stars Paul Rudd and Jason Segel, The Making of I Love You, Man, 50 minutes of hilarious outtakes, deleted and extended scenes and a gag reel.

The I Love You, Man DVD  discs include the following special features:

•    The Making of I Love You, Man (HD) – An 18-minute feature with cast interviews and a special look behind-the-scenes of the  film’s most outrageous moment

Win an I Love You, Man DVD. To
enter
the contest, simply tell us which is most annoying child’s toy and why . Send in your answers using the comment
form
below. Last date for entries is July 25, 2009.