(December 9, 2009)  The perennially popular Penguins are back with the world debut of their very first feature-length DVD, THE PENGUINS OF MADAGASCAR Operation: DVD Premiere, taking flight February 9, 2010. Starring the madcap pack of Penguins from DreamWorks Animation’s phenomenally successful MADAGASCAR franchise, Operation: DVD Premiere features never-before-seen missions that continue the MAD-tastic adventure, plus favorite escapades from the highly-rated Nickelodeon series “The Penguins of Madagascar.” The MADAGASCAR franchise has earned over $1 billion at the worldwide box office and the Penguins’ Nickelodeon show was the #1 series premiere ever for the network and was the #1 animated program in October for kids 2-11. 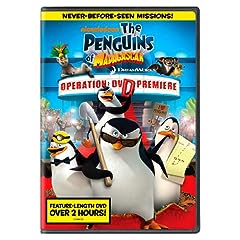 The world debut of THE PENGUINS OF MADAGASCAR Operation: DVD Premiere coincides with Nickelodeon’s “Operation Blowhole” tentpole event on February 15, delivering millions of impressions for the Penguins franchise, along with online advertising and promotion and an updated Nick.com/penguins microsite. Additionally, licensed merchandise based on the Penguins franchise will begin arriving on shelves in January.

To win a copy of the Penguins of Madagascar: Operation DVD Premiere, all you have to do is tell us the name of the best supporting role for a dad in a motion picture.
We’re looking for the character here, not the actual actor person.

Send in your answers
using the comment
form
below. Last date for entries is February 17, 2010.